Our List of the Best Theme Parks for Non-Coaster Lovers 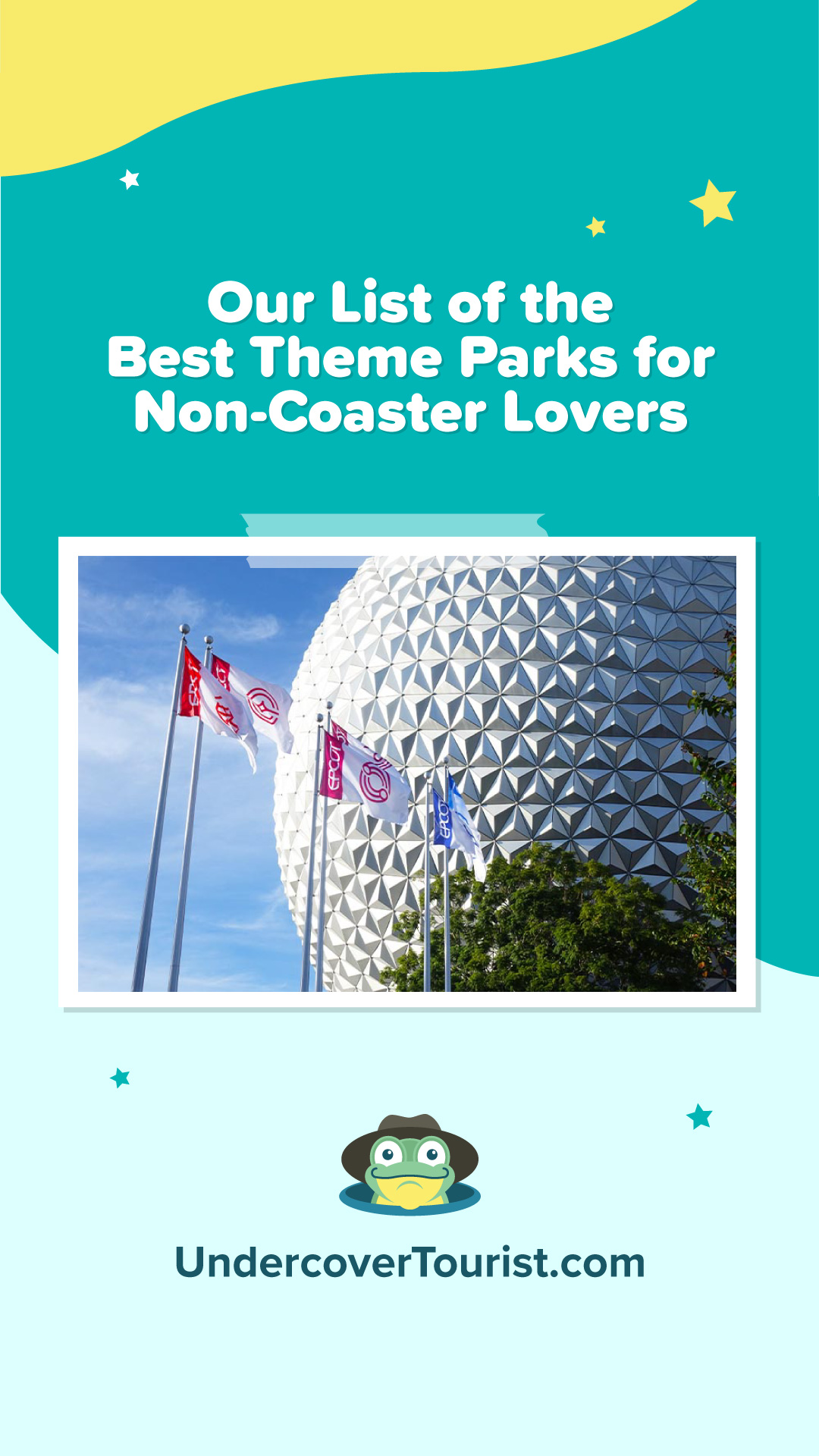 Roller coasters. For some, they evoke thoughts of thrilling drops, the wind racing through your hair and adrenaline-pumping excitement. For others, they evoke sheer and utter terror. While roller coasters are a theme park staple, know that you aren't alone if you wouldn't dream of stepping foot on one. (No matter what age you are!) Well, if you're one of our veloxrotaphobic friends (aka someone with a fear of roller coasters), you've come to the right place! Orlando is full of theme parks that cater to frogs of every age and thrill-seeking level. Hop through our list of the best parks for non-coaster lovers and find out how you can still have a toadally awesome time at any park without experiencing tight turns, steep slopes or intense inversions. 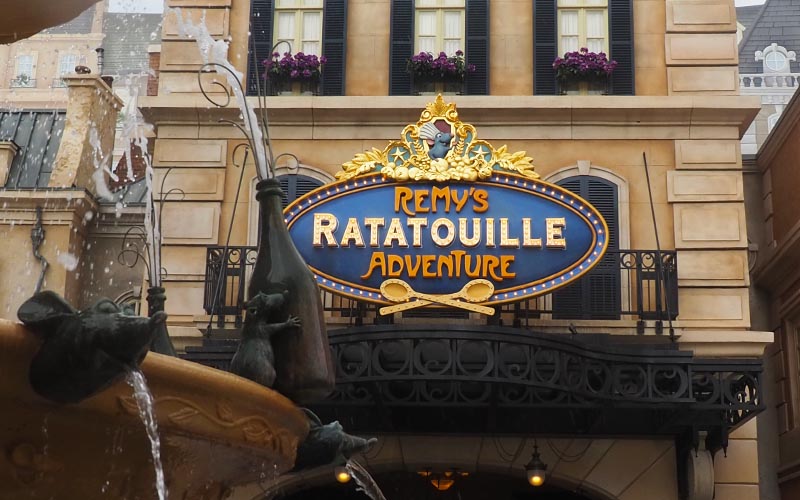 The Experimental Prototype Community of Tomorrow, aka EPCOT, is known for its 11 enriching country pavilions, food- and fun-filled festivals and, of course, that beautiful oversized "golf ball," Spaceship Earth. One thing you won't find in EPCOT, though, is roller coasters. EPCOT offers relaxing boat rides such as Living with the Land and Gran Fiesta Tour Starring The Three Caballeros, the chance to fly above the clouds with rides such as Mission: SPACE and Soarin' Around the World and the chance to catch up with beloved characters on rides such as Remy's Ratatouille Adventure and Frozen Ever After. The closest you'll get to that heart-pounding feeling (aside from opting for the Orange Mars Mission on Mission: Space — which we don't recommend for froggies with vertigo or sensitive stomachs) is Test Track where the top speed your car will hit is 64.9 miles per hour. With culture, creativity and cuisine abound, EPCOT is truly the safest bet for the coaster-averse.

NOTE: Guardians of the Galaxy: Cosmic Rewind will be blasting into EPCOT in 2022 — marking the first appearance of a roller coaster in the park! This story coaster will rotate 360 degrees and will be the first Disney ride ever to feature a reverse launch. Regardless of this addition, there's still plenty to do at this park even if you choose to avoid it — with more on the way! 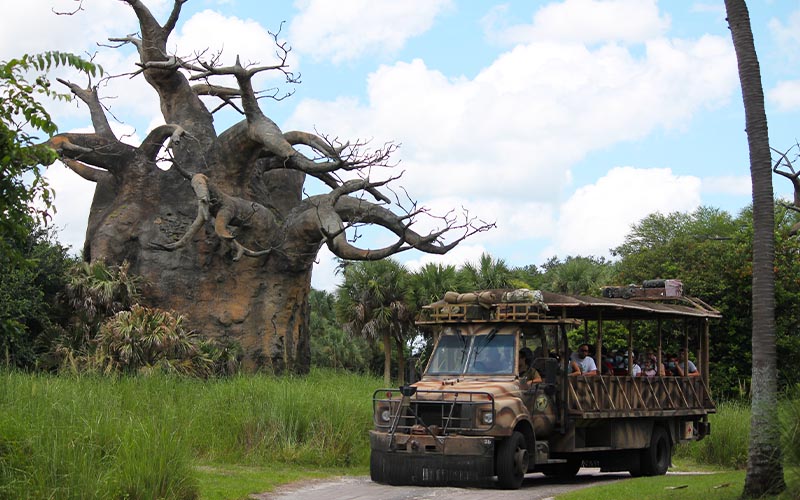 The land of flora and fauna needs to be a safe and serene place for the animals that reside there. That's why you'll only hear screaming coming from one location in the entire park. Expedition Everest - Legend of the Forbidden Mountain is the sole roller coaster in Animal Kingdom. While not a roller coaster, the only other thing that comes closest to one is DINOSAUR which is rocky, in the dark and features sudden dips and turns. The park's staple attraction is Kilimanjaro Safaris, a relaxing guided tour of an African savanna where you'll see elephants, giraffes, lions, hippos and many more animals roaming freely. That being said, the one can't-miss ride in this (or any) park is Avatar Flight of Passage. Nothing compares to flying on the back of a banshee and exploring Pandora in all its glory. (This ride is a simulator and does bump up and down so it's another one we don't recommend for froggies with vertigo.) There's also plenty of other attractions everyone in the family is sure to enjoy, including Na'vi River Journey — a relaxing boat ride through the jungles of Pandora where you'll come face to face with the Shaman of Songs — and It's Tough to be a Bug! — a 4D film starring the tiny but talented cast of "A Bug's Life." 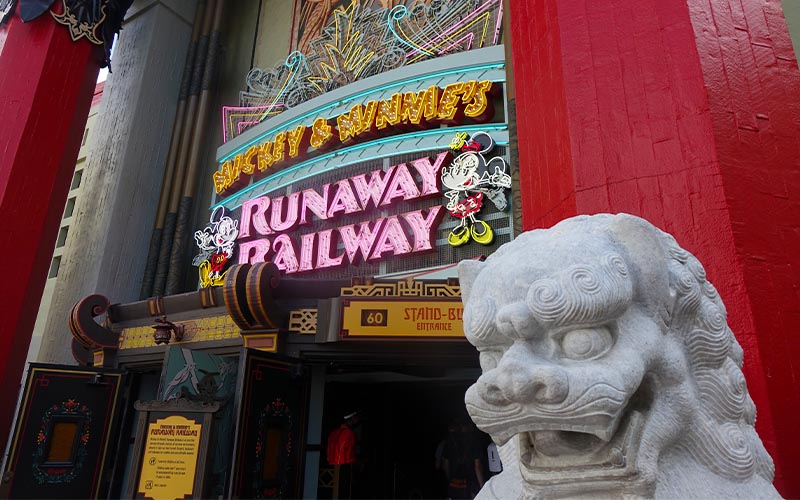 La La Land may be home to Rock 'n' Roller Coaster Starring Aerosmith and the much newer (but more tadpole-friendly) Slinky Dog Dash, but it's also where you'll find two of the three newest attractions in Walt Disney World — Star Wars: Rise of the Resistance and Mickey & Minnie's Runaway Railway. The closest either of these rides come to coaster territory is one small drop in Rise of the Resistance, but it's over before you even realize it hoppened! Additionally, Hollywood Studios is home to two "Star Wars" simulators in Millennium Falcon: Smugglers Run and Star Tours - The Adventures Continue and two twisty-turny "Toy Story" rides in Alien Swirling Saucers and Toy Story Mania! This park is also the best place to catch some live entertainment! Sit back, relax and sing along to your favorite Disney songs at Beauty & The Beast Live on Stage and For the First Time in Forever: A Frozen Sing-Along Celebration. 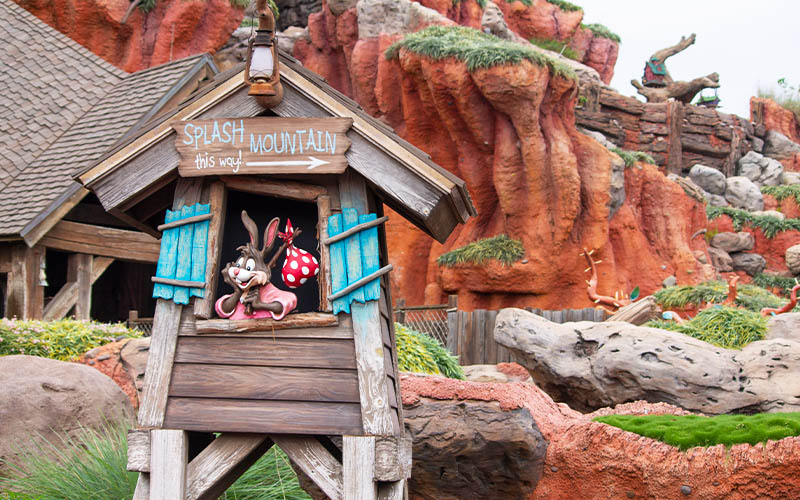 While Magic Kingdom has the most roller coasters out of any park in Walt Disney World (four with Space Mountain, Big Thunder Mountain Railroad, Seven Dwarfs Mine Train and the Barnstormer), it also has the most attractions (period) out of all the Disney theme parks. The lands of Adventure, Liberty, Fantasy, Tomorrow and the Frontier are home to rides that cater to all members of the family. From the slow-moving classics (e.g., Peter Pan's Flight and Haunted Mansion) to the wet and wild water flumes (e.g., Splash Mountain and Pirates of the Caribbean); from the timeless boat rides (e.g., Jungle Cruise and "it's a small world") to the flights with favorite characters (e.g., The Magic Carpets of Aladdin and Dumbo the Flying Elephant); from the musical revues (e.g., Country Bear Jamboree and Mickey's PhilharMagic) to the self-steering spinners (e.g., Mad Tea Party and Buzz Lightyear's Space Ranger Spin), there's so much to do at Magic Kingdom, you may not fit it all into one day! 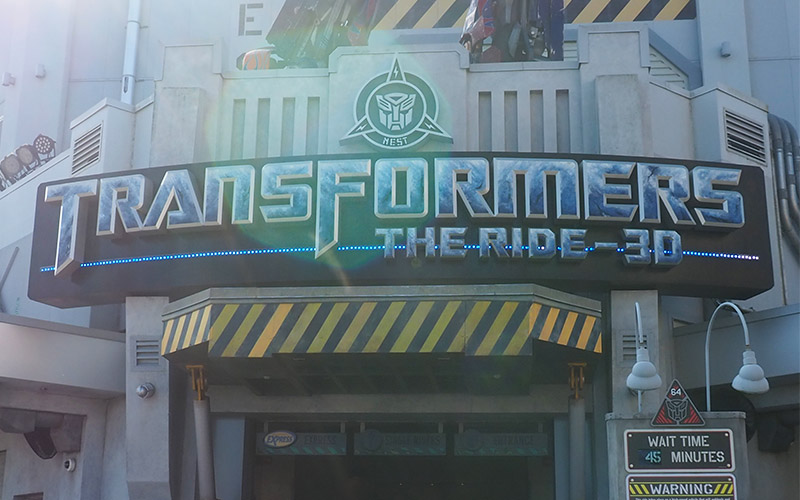 It's a widely accepted notion that Universal Orlando is the resort to take tadpoles to when they get a little older. And, statistically, it checks out. Universal currently has more roller coasters in two parks than Disney World has in four. From the tadpole-friendly Woody Woodpecker's Nuthouse Coaster to the wildly thrilling Hollywood Rip Ride Rockit, Universal Studios Florida is home to four different roller coasters. However, aside from the Hogwarts Express (which you need a park-to-park ticket to board), there are eight other rides and seven spectacular shows most any frog can enjoy! Catch up with some crazy yellow characters on Despicable Me Minion Mayhem and The Simpsons Ride. Help save the planet on MEN IN BLACK Alien Attack and TRANSFORMERS: The Ride-3D. Buckle up for some thrilling car rides on Fast And Furious - Supercharged and Race Through New York Starring Jimmy Fallon. Watch the business' best stunt performers (both human and animal alike) at The Bourne Stuntacular and Animal Actors On Location! At the end of the day, gather around the lagoon and enjoy Universal Orlando's Cinematic Celebration for an epic show that lights up the night! 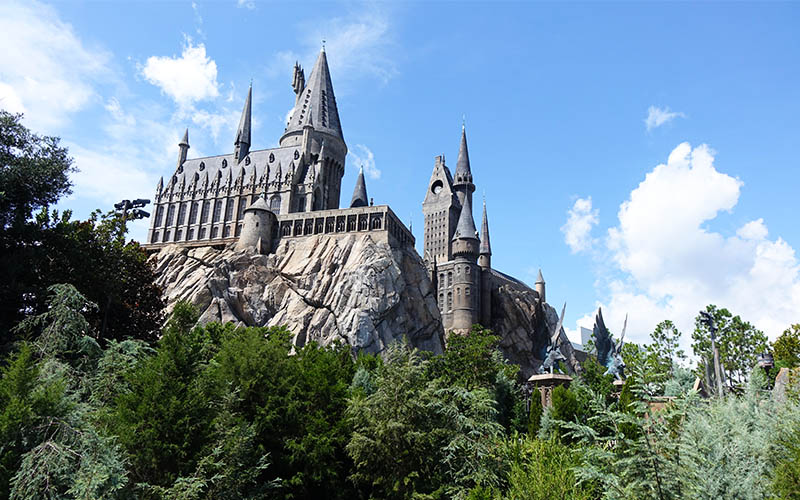 With the additions of Hagrid's Magical Creatures Motorbike Adventure and the brand-new Jurassic World VelociCoaster, Islands of Adventure also houses four coasters on its property. That being said, there are quite a few more rides in total at Islands of Adventure than Universal Studios! Once again, aside from the Hogwarts Express, there are 13 other rides that reside in the park's six islands. From the slow-moving silliness of The High in the Sky Seuss Trolley Train Ride! to the daredevil drops of Doctor Doom's Fearfall, Islands of Adventure's variety is second-to-none. This park offers you the chance to swing through New York City on The Amazing Adventures of Spider-Man and fly above Hogwarts Castle on Harry Potter and the Forbidden Journey. It's also the perfect park to cool off at on a hot Florida day with its three water rides that are sure to leave you drenched!

The two parks listed below are absolute favorites of Lily's! While coaster-averse tweens and teens may not find a lot to do at these parks, they are frogtastic choices to bring your younger tadpoles to. 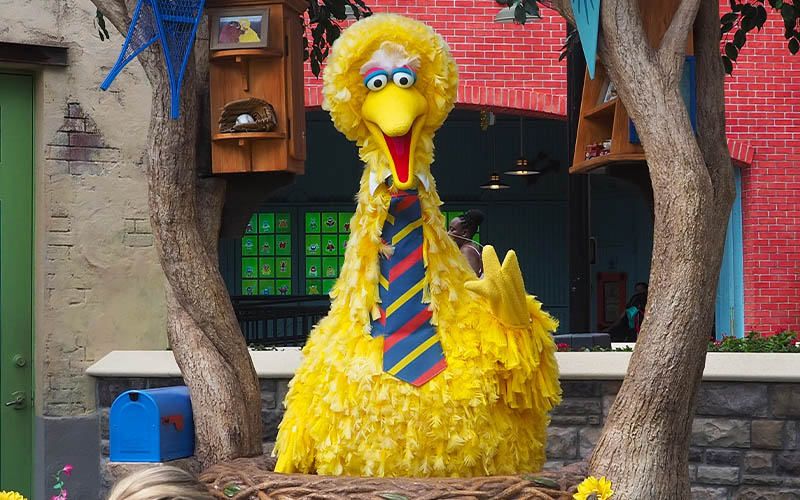 With rides such as Mako (the longest, fastest and tallest coaster in Orlando), Kraken (Orlando's only floorless coaster) and Manta (the only flying coaster in Florida), you might be wondering why SeaWorld is on this list at all. Well, with a classic carousel, relaxing flamingo paddle boats and six rides and two play areas (one wet, one dry) in Sesame Street Land, SeaWorld Orlando has plenty of fun things for tadpoles to enjoy! That's not even counting the incredibly cool animal experiences such as the Shark Encounter — which houses one of the world's largest underwater viewing tunnels — and the Stingray Lagoon — where you can reach your hand below the water and pet a real, live stingray! Lily also told me to remind you to check out the blacklight-illuminated jellyfish in the Jewel of the Sea Aquarium which are mesmerizing to watch. 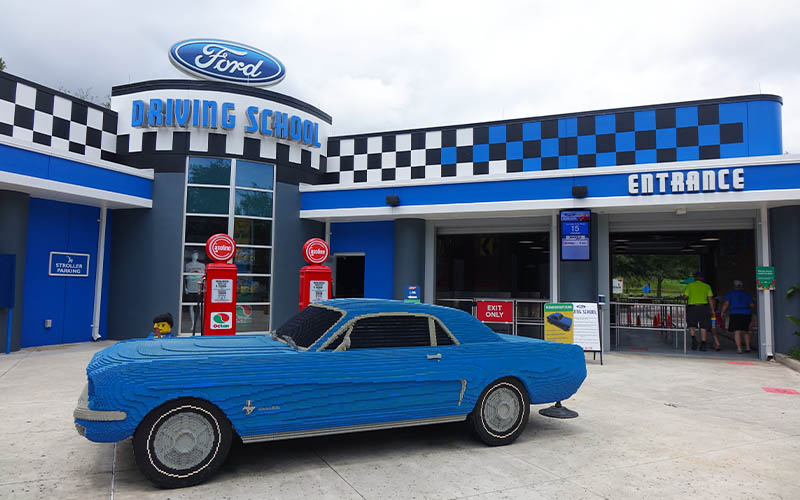 While they're all varying levels of tadpole-friendly, LEGOLAND is home to five different roller coasters. However, there is so much else to do at this Winter Haven park, you can spend a whole day here and never have a dull moment. Channel the elements and defeat powerful enemies on LEGO NINJAGO The Ride. Fly alongside familiar and new characters on THE LEGO MOVIE Masters of Flight. Enjoy aerial views of the park on Kid Power Towers. Battle mummies and skeletons on Lost Kingdom Adventure. Navigate the roads and waters of LEGO City at the Ford Driving School and Boating School, respectively. If you need to rest your feet, be sure to check out the brand-new Brickbeard's Watersport Stunt Show — a thrilling display of aquatic feats!

If you don't do coasters, which theme park is your favorite? Any must-do attractions you want to share? Let us know in the comments below!

Related: The Best Theme Parks in Orlando for Every Age Group

SAVE $37 vs Gen. Admission gate price